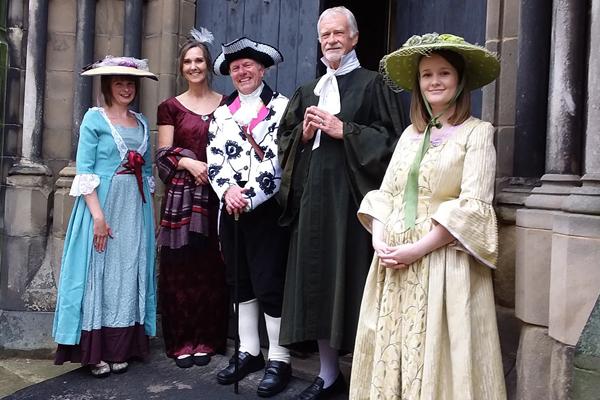 Join the fun at this year’s Heritage Festival on Saturday 14 and Sunday 15 September in Lichfield city.

Preparations are in full swing for Lichfield Heritage Festival, which is set to include free entertainment and entry to historic venues that are not usually open to the public, and to celebrate Samuel Johnson’s 310th birthday.

The programme of entertainment on Lichfield’s Market Square on Saturday will feature dancing, live music and performances, as well as the Samuel Johnson Birthday celebrations and the mini town crier competition.

On Saturday The Samuel Johnson Birthplace Museum will be offering free birthday cake (while stocks last), and then on both days of the festival visitors can find out more about the power of the printing press and print off their own poster. Over at Erasmus Darwin House on Saturday there is an exhibition and activities around how artists and scientists have worked together to portray prehistoric creatures.

Venues that will be opening their doors on Saturday include the Citizens Advice Bureau, Wade Street Church, Dr Milley’s Hospital, the old prison cells at the Guildhall, St Michael on Greenhill Church and Letocetum Roman Site and Museum.

The History Access Point in Lichfield Library will be hosting an exhibition on Lichfield during the English Civil War on Saturday. Georgian Jono will also be signing copies of his ‘A to Z of Lichfield’ in the library between 1pm and 3pm.

Visitors to the city can also stop off at the King’s Head on Bird Street to find out more about the Staffordshire Regiment and how it was formed.

A number of tours will take place over both days of the weekend, including a series of Discover Lichfield walks, a behind the scenes tour of the Lichfield Garrick, the chance to hear poetry at Monks Walk Garden, a walk to find out more about St Chad along Pool Walk, and a walk to Sandfields Pumping Station and Lichfield Canal led by Lichfield Waterworks Trust and Lichfield Hatherton Canals Restoration Trust.

“After seeing the city bustling recently with Lichfield Food Festival and One Small Step at the cathedral, I am really looking forward to seeing another fascinating side of Lichfield come alive.

“I am sure people are going to enjoy the programme of events on the Market Square, as well as those happening around the city, in places we may not normally get to see.

“It is going to be a great weekend on 14 and 15 September with the Community Games happening in Beacon Park as well. www.visitlichfield.co.uk/whats-on has details of lots of great things happening in and around Lichfield District all the time. I would encourage everyone to have a look and also to sign up for the monthly newsletter that lets you know what's going on and the special offers that are available."

To find out more about Lichfield Heritage Festival pop into Tourist Information at St Mary’s on the Market Square or call the team on 01543 308924.