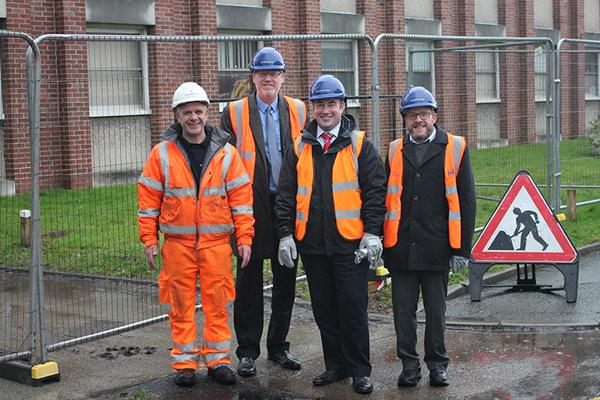 Fencing is going up at a key site in Lichfield city centre, which is the first step in the work to improve the Birmingham Road site before it is developed in the future.

The work will make the area safer, more useful and attractive, and provide a better route into the city from the train and bus stations.

“It is really fantastic to see the work starting to bring down the old police station, clean up and open out the site, and visitor coach parking and a renewed bus station being delivered.

“It often takes time for decisions in the council to turn into action. Now that the work is starting we are hoping to see it completed by the spring.

"As things are moved around in the bus station there will be some short-term disruption while the works take place. The bus station car park will be closed for a number of weeks, but there is plenty of space in nearby car parks.

"I know from the people who have contacted me, it is important to make sure toilets are available for bus and coach travellers and these will be available throughout the works and afterwards.

"I hope the works will make the bus station and route into the city centre a much nicer place for everyone coming into Lichfield. I also hope that it will present a welcoming place for anyone coming to visit Lichfield and that the displays on the hoardings will encourage the day visitors to come back again, as they are intended to highlight what else we have to offer in our district."

The short-term improvements will also help prepare the ground for the site’s future long-term development. Plans for the area are being formulated through the Lichfield city centre masterplan, which is currently open to public consultation.

The masterplan, which has been drawn up by David Lock Associates, sets out how the city centre could be shaped in the future and is being consulted on until 3 February 2020.

“I would ask everyone to get involved with the consultation. If you can't make the drop-in events then please let us know your views via the online app that has been set up. The draft masterplan includes some ideas that I am sure people will have an opinion on. We want to hear what everyone thinks, as this the opportunity to shape how our city centre will work and what it will look like for the future,” added Cllr Eadie.

To read the masterplan and give your views through an interactive survey, visit www.lichfielddc.gov.uk/lichfieldmasterplan.