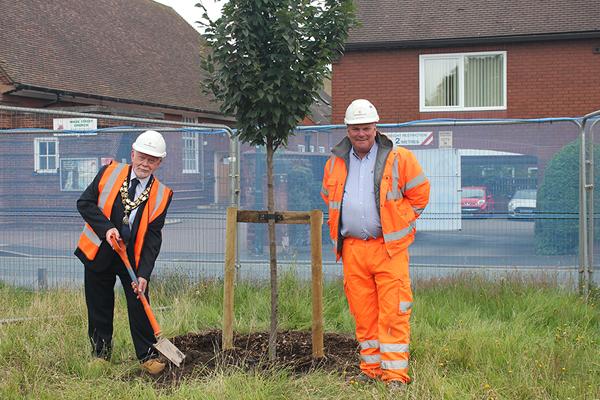 The Chairman of Lichfield District Council takes part in a tree planting ceremony at the Birmingham Road site in Lichfield on Wednesday 15 July 2020.

Councillor Joe Powell, Chairman of Lichfield District Council, joined The Coleman Group’s site manager, Paul Schwarm, to plant a Hornbeam tree, one of five new trees, on the site of the former police station, which was demolished earlier in the year to make way for the Birmingham Road site improvements.

“I was delighted to plant a new tree at our Birmingham Road site. It marks the start of the landscaping works that will really improve the look and feel of this area, while we shape the longer-term plans for this important gateway site.

“We are in the final phase of the improvement project, and are all looking forward to the works being completed later this summer.”

When finished, the improvements will make the area safer, more useful and attractive, and provide a better route into the city from the train and bus stations.