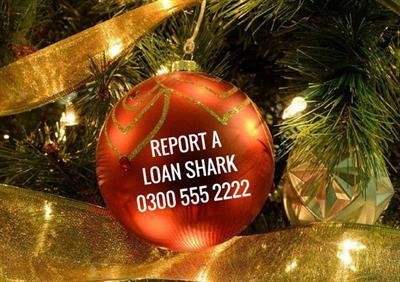 Unscrupulous loan sharks are being targeted as part of a national campaign aimed at clamping down on illegal money lenders.

Starting today (Wednesday 5 December), the England Illegal Money Lending Team has launched a social media campaign to give users advice on how to avoid falling victim to loan sharks, as well as reporting illegal money lending in their community.

“Loan sharks are a scourge on our communities, taking advantage of people in desperate situations and trapping them in a cycle of debt and misery. This time of year is especially profitable for them as they prey of people trying to cope with the pressures of Christmas.

“If you do need to borrow this Christmas, do so from a responsible, ethical source - such as a credit union and avoid turning to illegal money lenders.”

There is also a photo caption competition running on the team’s Facebook page. Users with the best caption ideas for Sid the Shark and Glenda the Lenda photos will win a prize. The campaign will also be accompanied by the hashtag #SLSWeek18.

What defines a loan shark?

Any person lending money should have a consumer credit licence from the Financial Conduct Authority (FCA). Licensed lenders have to comply with legal obligations in dealing with consumers, including the use of official paperwork and fair collection methods. Loan sharks operate illegally without the correct permissions from the FCA.

These criminals often take benefit or bank cards as security and resort to intimidation and violence if victims default. Loan sharks can charge extortionate interest rates running to thousands of percent, making it impossible for victims to repay the loan.

Tips to protecting yourself against loan sharks this Christmas:

If you have been the victim of a loan shark, you can contact the Illegal Money Lending Team in confidence on 0300 555 2222 or stoploansharks.co.uk. Their lines are open around the clock throughout the festive season.