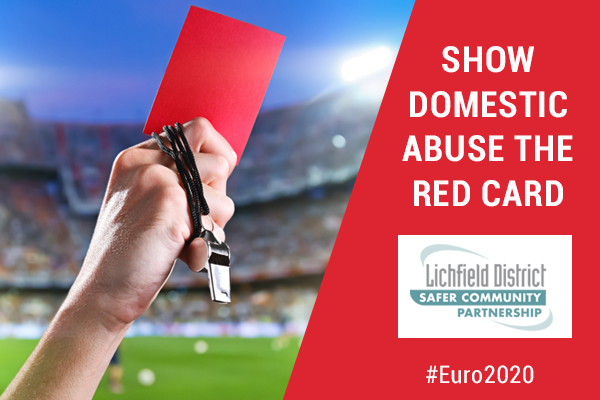 Partnership comes together ahead of the UEFA European Football Championship to tackle domestic abuse.

Over the football tournament Lichfield District Safer Community Partnership is raising awareness of the support on offer around domestic abuse.

Domestic abuse can be triggered by many things, including alcohol, and it isn’t always just physical – it can be a pattern of controlling, threatening and coercive behaviour, which can also be emotional, economic, psychological or sexual.

“Throughout the Euros tournament we’re reminding domestic abuse victims that there is help on hand. We’ll be promoting New Era and other local support services, so anyone who has concerns knows where to turn.

“This is in addition to encouraging football fans to drink responsibly and make a choice to either drink or drive. Our neighbourhood teams will be working closely with council colleagues to keep everyone safe and we’ll also have additional patrols on duty in the city centre.”

“Many of us are looking forward to the Euros getting underway. However, for some supporters the mix of emotion and alcohol can lead to increased tensions in relationships, making volatile situations even more dangerous for those around them.

“This is why we’re linking up with Staffordshire Police and other organisations in the partnership to reassure anyone who is experiencing domestic abuse that help is on hand.”

“Football tournaments like this one can be a great way of bringing communities and families together. However, sadly, they often coincide with an increase in referrals to specialist support services like ours.

“But, it’s not an unfavourable match result or someone drinking too much alcohol that causes domestic abuse. Domestic abuse is caused by one person wanting to exert power and control over another. It’s never acceptable and it’s illegal.

“If you’re experiencing domestic abuse, or you want support to change your abusive behaviour, we can help you. New Era supports adults and children of all ages, genders and ethnicities living in Lichfield and elsewhere in Staffordshire and Stoke-on-Trent.”

If you want support to change your abusive behaviour, please contact New Era perpetrator services on 01785 601690.

Pathway Project also supports adults, young people and children from Lichfield District and Tamworth who are experiencing or affected by domestic abuse. Pathway's 24-hour confidential helpline is 01543 676800 and more information is available online at www.pathway-project.co.uk.