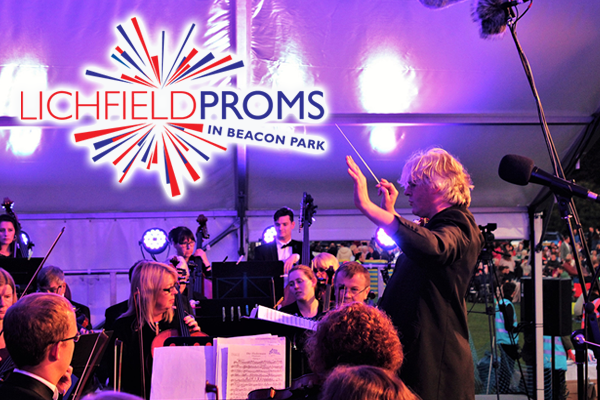 With Lichfield Proms just over a week away the organisers are giving a sneak peek at the musical programme that has something for everyone.

Lichfield District Council is putting the finishing touches to arrangements for its proms night spectacular, which is taking place in Beacon Park on Saturday 4 September 2021.

The free entry event will get underway from 6pm when Eureka Jazz will take to the stage to warm the audience up as they find their spaces.

In what is a first time appearance for the band at Lichfield Proms, the quartet will play a mixture of traditional jazz and melodic tunes from the Great American Songbook of the 1920s, 30s and 40s.

This will lead up to the main concert from 7.30pm performed by The British Police Symphony Orchestra, conducted by Richard Jenkinson.

Musical highlights include the themes from 2001 Space Odyssey, James Bond and Monty Python’s Flying Circus, as well as Nimbus 2000 from Harry Potter and The Philosopher’s Stone and a medley from The Sound of Music.

The soprano Claire Prewer will sing You Raise Me Up and the tenor Anando Mukerjee will sing Nessun Dorma, and they will both perform the Love Duet from Madame Butterfly.

The night will be brought to a close with a firework finale and all the proms anthems, including Land of Hope and Glory.

“We wanted to bring something for everyone after such a lengthy absence and difficult times. We are truly excited to bring live music back onto the stage once again.”

“We’re looking forward to welcoming everyone to our twenty-second Lichfield Proms, and the audience will be in for a treat with a musical programme that includes film scores, popular classical music and opera, along with all the proms anthems we know and love.

“Thanks to a collaboration with Ibiza Proms, this year our event will feature a new stage and an improved sound system. We’re also changing the layout, moving the gazebos back to allow everyone to spread out more on the night. We’ll also be encouraging everyone to wear face coverings in busy areas and to use the hand sanitiser that will be available.”