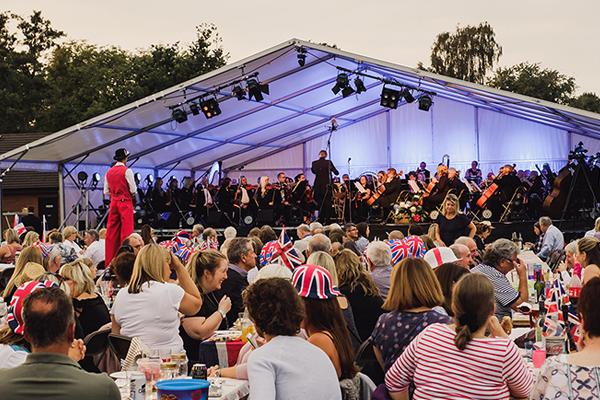 The sun shone and an estimated 15,000 people descended on Beacon Park on Saturday to enjoy the council’s twentieth Lichfield Proms.

The end-of-summer event featured music from the City of Lichfield Concert Band and the British Police Symphony Orchestra.

The City of Lichfield Concert Band played as proms-goers found their spaces. This led up to the British Police Symphony Orchestra taking to the stage at 7.30pm. The 75-piece orchestra, conducted by Richard Jenkinson, was joined by experienced compere, Danny Mizon and the singers Claire Prewer and Anando Mukerjee.

The evening ended with everyone on their feet, waving their Union Flags to the proms anthems, Rule Britannia, Jerusalem and Pomp and Circumstance No 1, to an extra special firework finale overhead.

“What a fantastic evening. We had record numbers, with thousands joining us to celebrate our twentieth year of Lichfield Proms. It was a joy to see everyone having such a great time, waving their flags, enjoying the music and the atmosphere.

“A big thank you must go to all the proms team who work so hard to organise Lichfield Proms, and to all the sponsors who help to support this spectacular event, and to the brilliant musicians for thoroughly entertaining us.”