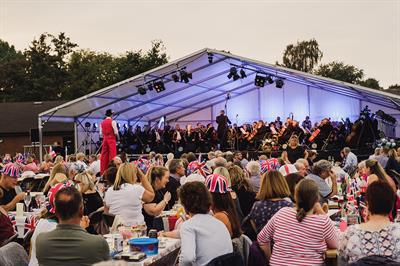 There are plenty of musical treats in store for the audience at Lichfield Proms in Beacon Park on Saturday 1 September.

Festivities will start with children’s activities from 5.30pm, then the City of Lichfield Concert Band will warm up the audience from 6pm, and The British Police Symphony Orchestra will take to the stage at 7.30pm for the main concert.

The City of Lichfield Concert Band has a treat in store for movie lovers, as they will be playing a mixture of popular classical music, musical medleys, jazz, film scores and well known pop songs.

This will build up to the British Police Symphony Orchestra which is a 75-piece orchestra conducted by Richard Jenkinson, who will be joined on stage by experienced compere, PC Danny Mizon.

Together they will take concert-goers through the main programme on the night, which includes music from La Bohème, Star Trek, Adagio from Spartacus, the Dambusters March, a World War One medley, Sea Songs and more.

The evening will end with a fireworks finale and all the proms anthems, including Pomp and Circumstance No 1 and Jerusalem.

“Our line-up includes something for everyone, combining popular film and TV music, with Opera and rousing classical pieces that I know the audience will love. A highlight for me is the World War One medley, which includes The Last Post, Pack Up Your Troubles, and It’s a Long Way to Tipperary, which is very fitting as we mark the centenary of the end of the war.”

“With top class music, picnicking under the stars in the beautiful surroundings of Beacon Park, and plenty of community cheer, our twentieth Lichfield Proms in Beacon Park promises to be a fantastic event for the whole family. We will be celebrating 20 years of proms so this year is very special and will have some extra surprises.”

To find out more about Lichfield Proms in Beacon Park, please visit www.lichfielddc.gov.uk/lichfieldproms