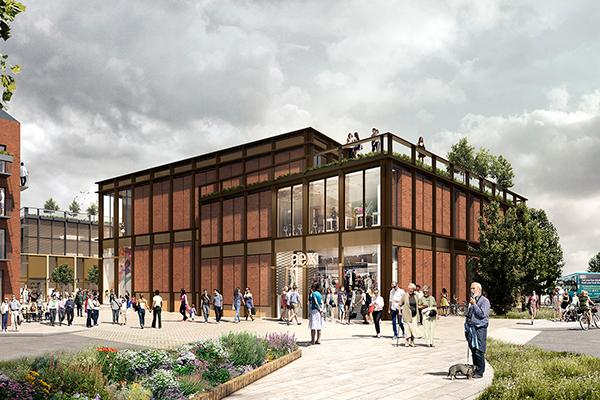 “Although this is disappointing news, we are confident the Birmingham Road site still offers great potential for a refreshed mixed-use development that better meets the needs of our growing community and the changing face of today’s high streets.”

At the meeting councillors heard that while key components, including land acquisition and lettings, are in place to deliver Friarsgate, an investor has not been secured. In the absence of a private sector investor, Lichfield District Council had been asked to fund the scheme.

To do this, a loan of nearly £50 million would be required, yet the projected return on investment of public funds would be very low, and such an investment might contravene the council’s procurement rules.

he proposal for the council to fund Friarsgate was considered by a joint Overview & Scrutiny committee in May and by Cabinet in June. Full Council was told that both committees were of the view that the council should not take out such a loan.

Full Council was also briefed on the benefits of the scheme, the state of the retail market, and the financial risks such an investment could bring. After weighing up the positives and negatives, councillors voted to terminate the development agreement if a funder is not found by 30 June 2018.

In making the decision, councillors noted the high level of borrowing, the limited return on investment, the risks in the current retail and leisure market, and concerns that the proposed scheme is not sustainable given the changing face of high streets nationwide.

“We know this decision will disappoint many people who were looking forward to the benefits Friarsgate would have brought in terms of leisure and retail opportunities.

“While we would also welcome these benefits, as a council we need to ensure we are not creating a debt we cannot repay and which could negatively impact vital council services in the future. As such, if a funder is not secured by 30 June 2018, the development will not continue in its current form.

“That said, we now have an exciting opportunity to consider how this prime city centre site can be regenerated to create an invigorated and sustainable city centre. We look forward to involving local people and local businesses in these discussions.”

How much has been invested in Friarsgate to date?

The council has invested £4.35 million in the scheme to date, and we are budgeting to spend a further £2.5 million on land acquisition and outstanding commitments. Of this £4.5 million has been invested in land and reclamation, which the council retains the value.

What will happen to the site now?

The council plans to carry out consultation on future plans for the site and will involve local people and businesses in determining the most appropriate, financially beneficial and sustainable use for the site.

Why did Lichfield District Council get asked to fund the scheme so late?

It is usual that development schemes of this nature are designed, planning permission is achieved, and lettings are secured before approaching the funding market. This is because it makes such schemes more attractive as they are more immediately deliverable. Usually securing funding is the final piece in the development jigsaw. Following a disappointing Christmas/New Year trading period for retailers nationwide, it was only in spring 2018 that it became clear that the only way of delivering Friarsgate was through public borrowing, and the council was asked to consider funding the scheme.

Why was the garage given notice to quit and the building demolished?

The council served notice on the occupiers of the garage site on the understanding that the development was set to progress to funding and construction imminently. The garage had been on a lease for 12 years, and when the occupiers took on the lease they were aware it was identified as a future development site, and that the lease would only be for a fixed period, depending on when a development came forward. The council worked closely with the occupiers to help them find an alternative site, but none were fully pursued. When the occupiers vacated the site, the buildings were demolished to reduce the council’s health, safety and insurance risks.