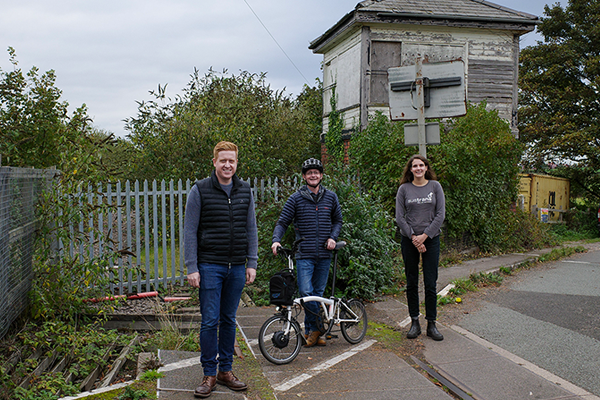 A study looking at how a greenway between Brownhills and Lichfield might be developed is well underway.

Over the summer Lichfield District Council commissioned Sustrans, the national walking and cycling charity, to complete a feasibility study on the creation of a greenway for walkers and cyclists on the mothballed South Staffordshire Railway line from Brownhills to Lichfield.

Sustrans has updated the council on the progress it has made on the study so far. This includes engineers visiting access points along the track to see how the greenway would interact with residential areas, community facilities and proposed development, including the Lichfield and Hatherton Canal restoration project.

The engineers are working on the designs for the greenway, which will feature a minimum three metre wide surface that is accessible to everyone. Extra leisure elements, such as a new play space at the Lichfield end overlooking the city and pockets for artwork and seating, are also being added to the plans.

Work has also started to explore how to involve local communities in the project, mapping out where the council will need to engage as the greenway progresses.

Sustrans is now working with Network Rail to allow their ecologists to gain access to the old rail track, so they can analyse the potential ecological impact of the traffic-free route and how biodiversity can be protected and encouraged along the length of the greenway.

"I’m really pleased to hear about all the progress being made on the feasibility study, which is very positive. The sooner we have an overall idea of what the project will involve, from the designs through to local engagement, the sooner we can work in partnership to make it happen.

“Greenways are amazing as they encourage walking and cycling in safe spaces away from traffic and connect communities. To have an old railway line fenced off and unused is such a shame, and so bringing it back as a greenway for the good of all our local communities would be a real achievement.”

“We are excited to be working with Lichfield District Council on the greenway feasibility study.

“It would provide a key connection between two areas, providing a traffic-free route for school travel, commuting and leisure. It would link to Chasewater and onto the McClean Way.

“The existing National Cycle Network Route 5 is on road, so the greenway would provide a safer alternative for all users, supporting our Paths for Everyone strategy.”